The carbon the world forgot

Boreal Forests Store More Carbon than Tropical Forests
Ottawa, Ontario—When the world thinks of forests and their value to offset global warming, tropical forests come to mind. A report released today shows that the global impact of Canada’s boreal forest, which stores nearly twice as much carbon per hectare as tropical forests, has been vastly underestimated.

“The Carbon the World Forgot” identifies the boreal forests of North America as not only the cornerstone habitat for key mammal species, but one of the most significant carbon stores in the world, the equivalent of 26 years of global emissions from burning fossil fuels, based on 2006 emissions levels. Globally, these forests store 22 percent of all carbon on the earth’s land surface.
“Past accounting greatly underestimated the amount and depth of carbon stored in and under the boreal forest,” said Jeff Wells, an author of the report. In addition to carbon storage in trees, organic matter accumulated over millennia is stored in boreal peatlands and areas of permafrost. Some of this boreal carbon has been in place for up to 8,000 years.
The boreal forest’s status as the most intact forest left on earth also offers a unique opportunity for plants and animals forced to adapt to shifting habitats. Most other habitats today are highly fragmented by human activity, creating a variety of additional obstacles for species survival.
In light of these findings, today’s report urges that international negotiations on carbon and forest protection consider ways to account for and protect the boreal.
“Any effective and affordable response to climate change should include preserving the world’s remaining, carbon-rich old-growth forests,” said Steve Kallick, director of the Pew Environment Group’s International Boreal Conservation Campaign. “This report makes clear that nations must look not just at the tropics but at all the world’s old-growth forests for climate change solutions.”
“Keeping that carbon in place by protecting boreal forests is an important part of the climate equation,” said Dr. Andrew Weaver, “If you cut down the boreal forest and disturb its peatlands, you release more carbon, accelerating climate change.” Dr. Weaver of the University of Victoria is a lead author for the United Nations Intergovernmental Panel on Climate Change, which was awarded the Nobel Prize.
“The collision of climate disruption and massive human degradation of ecosystems is seriously worrying globally,” said leading conservation biologist Dr. Stuart Pimm of Duke University. “These changes are surely novel in earth’s history.” Maintaining the boreal forest’s intactness will be critical to slowing ecosystem shifts and to providing migratory corridors for displaced wildlife.
“Conservation can be an important tool in the fight to mitigate climate change” said Larry Innes, Director of the Canadian Boreal Initiative. “International protocols and legislation need to create opportunities to maintain the carbon stored in intact boreal forest soils, peatlands, and wetlands while enabling indigenous and local communities to take a leadership role in determining how to best conserve not only carbon, but the full suite of ecological, cultural and economic values that the boreal forest represents.”
More than 1,500 international scientists led by authors for the United Nations’ Intergovernmental Panel on Climate Change recommended in 2007 that at least half of Canada’s boreal forest be protected from further disturbance – in large part to keep both the boreal forest carbon bank and internationally significant wildlife habitats intact. Despite the current lack of international protocol, several Canadian First Nation, provincial, and federal governments have taken important steps to protect hundreds of millions of acres of Canada’s carbon rich boreal forest. In all, scientists are recommending that at least 300 million hectares be protected.
For further information:
Larry Innes, Executive Director, Canadian Boreal Initiative, 416-575-6776, 613-230-4739 ext 226; linnesborealcanada.ca
Steve Kallick, Director, International Boreal Conservation Campaign (IBCC), Pew Environment Group 206-327-1184; skallickpewtrusts.org
Dr. Jeff Wells, science advisor to IBCC, 207-458-8492; jeffinterboreal.org
Dr. Stuart Pimm, Duke University, contact Sue Libenson, 907-766-2841; sueinterboreal.org
Dr. Andrew Weaver, University of Victoria, contact Sue Libenson, 907-766-2841; sueinterboreal.org
For interviews in French: Dr. Pascal Badiou, Dr. Marcel Darveau, Ducks Unlimited Canada, contact Suzanne Fraser, (613) 230-4739 ext. 2530; sfraserborealcanada.ca
You can read the full report and associated materials. 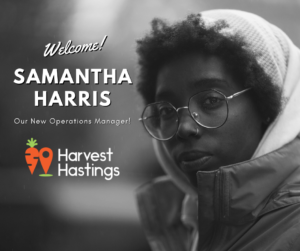 Hello and Goodbye at Harvest Hastings

Hello Samantha! Hi! My name is Samantha Harris. I am the new operations manager at Harvest Hastings. I will certainly get to 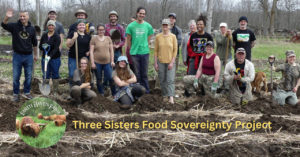 Three Sisters and Giving Thanks 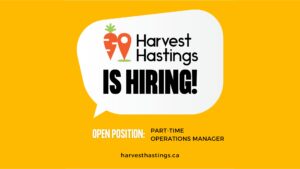